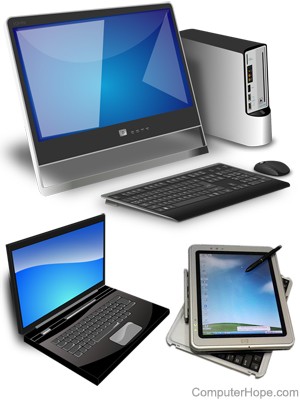 A computer is a programmable device that stores, retrieves, and processes data. The term “computer” was originally given to humans (human computers) who performed numerical calculations using mechanical calculators, such as the abacus and slide rule. The term was later given to a mechanical device as they began replacing the human computers. Today’s computers are electronic devices that accept data (input), process that data, produce output, and store (storage) the results.

Below is a picture of a computer with each of the main components. In the picture below, you can see the desktop computer, flat-panel display, speakers, keyboard, and mouse. We’ve also labeled each of the input devices and output devices.

History of the computer

The first digital computer and what most people think of as a computer was called the ENIAC. It was built during World War II (1943-1946) and was designed to help automate the calculations being done by human computers. By doing these calculations on a computer, they could achieve results much faster and with fewer errors.

Early computers like the ENIAC used vacuum tubes and were large (sometimes room size) and only found in businesses, universities, or governments. Later, computers began utilizing transistors and smaller and cheaper parts that allowed the ordinary person to own a computer.

How are computers used today?

Today, computers make jobs that used to be complicated much simpler. For example, you can write a letter in a word processor, edit it anytime, spell check, print copies, and send it to someone across the world in seconds. All these activities would have taken someone days, if not months, to do before. Also, these examples are a small fraction of what computers can do.

What components make up a desktop computer?

Today’s desktop computers have some or all of the below components (hardware) and peripherals. As technology advances, older technologies, such as a floppy disk drive and Zip drive (both shown below), are no longer required or included.

What parts are needed for a computer to work?

A computer does not require all the components mentioned above. However, a computer cannot function without having at the very minimum the parts listed below.

Once a computer is set up, running, and connected to a network, you could disconnect the keyboard and monitor and remotely connect. In fact, this is how most servers and computers in data centers are used.

All computers have different types of connections. An example of the back of a personal computer and a brief description of each connection is found on our computer connections page.

When talking about a computer or a “PC,” you are usually referring to a desktop computer found in a home or office. Today, however, the lines of what makes a computer are blurring. Below are all the different examples of what is considered a computer today.

The picture above shows several types of computers and computing devices, and is an example of their differences. Below is a complete list of computers of past and present.