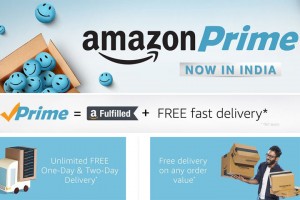 Amazon has launched its new service named as Amazon Prime in India. Yesterday in Bangalore, Mr. Amit Aggarwal, President and Country Head – Amazon India has launched its service for the customers in 100 cities of India. This service provides 60-day free trial to its customers and early access to its exclusive offers for customers subscribing this service.

Amazon launched its Prime subscription service in India, as this American online organization looks to drive more faith among its growing customers in India. It will cost Rs. 499/- for a year after the trial is over. This discounted offer price will be valid for a limited period of time. After that it will cost Rs. 999/- per year.

This Amazon Prime service is great for both customers and sellers, as said by Mr. Amit Agarwal when asked in an interview. For customers, one-day and two-day delivery, which is something that they enjoy as an occasional feature, will now become an everyday experience as they shop daily for products on Amazon.

For sellers, Fulfilment by Amazon (FBA) becomes even more attractive. FBA has helped seller’s lower costs and increase sales. Now, all their products under FBA will be eligible for Prime. So, Prime will result in more sales for sellers who sign up for FBA.

For customers who are opting Amazon Prime features have one more option i.e. they are available to the best deals first as they will have option to get exclusive deals before 30 minutes from the offer time. It is also helpful to choose the prime Early Access filter when you search deals, and be the first to view the best deals every day.

In June, Amazon said it will invest an additional $3 billion in India after it exhausted its earlier investment pledge of $2 billion, as it goes for the kill in the market share war with local rival Flipkart & Snapdeal.

Currently, Amazon opponent Flipkart offers its own version of Prime called Flipkart First. However, Flipkart hasn’t seen the kind of customer uptake it expected and Flipkart First isn’t a major contributor to the company’s growth, highlighting the difficulties in operating a programme successfully in a country that has poor infrastructure.

Amazon Prime costs $99 (approx. Rs 6700) per year in the US. Amazon has tasted a great success in US with Prime, so now Amazon wants to launch this service in India. It has increased its sales growth in US. This service is available in all 11 countries where Amazon works. It is also helpful for shoppers to increase their spending on Amazon after signing up for Prime. That’s the nature of e-commerce competition.

Prime Video, i.e. Amazon original TV series and movies besides Indian and global content, is expected to be launched as a part of this service, but at a later date.

Amazon said it will also offer video content later under Prime, though it didn’t disclose its proposed launch date. In the US, Prime’s video streaming service is the only major competitor to Netflix.